Minion: Sire, the people have no fuel!

Obama: Then let them drive hybrids.

I am surprised (OK, I’m not) that this has not had wider coverage in the press.

Fuel prices in the US have risen 67% during the Obama maladministration. 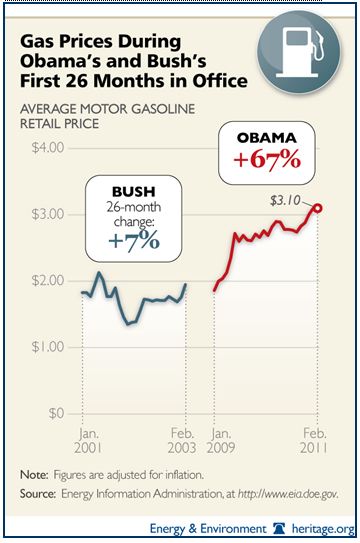 Instapundit reported yesterday that Obama had responded to a complaint by a working man that he could not afford to buy the fuel he needed to get to work, with the suggestion he should buy a new car. The Associated Press subsequently removed this comment from their reporting of the event, but Glenn had saved a screen shot of the original report, complete with Marie Antionette/Obama quote.

America, 2011: A man gets driven in a motorcade to sneer at a man who has to drive himself to work. A guy who has never generated a dime of wealth, never had to make payroll, never worked at any job other than his own tireless self-promotion literally cannot comprehend that out there, beyond the far fringes of the motorcade outriders, are people who drive a long distance to jobs whose economic viability is greatly diminished when getting there costs twice as much as the buck-eighty-per-gallon it cost back at the dawn of the Hopeychangey Era.
So what? Your fault. Should have gone to Columbia and Harvard and become a community organizer.