I have been gobsmacked by suggestions from some people that there is some sort of moral equivalence between Israel and Hamas (the idea that they are both as bad as each other), or even worse, that the current conflict is Israel’s fault.

The present Palestinian people are Arabs, most of whom arrived in the area within the last two centuries. They are unrelated to the Philistines after whom the Roman and Turkish provinces were named.

In 1922 the League of Nations approved the British Mandate over the Turkish province of Palestine, including word for word the text of the Balfour Declaration, which affirmed the historical connection of the Jewish people to the land, and called for the setting up of an independent home state for the Jewish people.

Despite the fact that The British mandate was a tiny proportion of the land of the Middle East, and that it was surrounded by Arab states, the British allocated 70% of the mandate area to be a homeland for the region’s Arabs. This part of the mandate was called trans-Jordania, and then just Jordan.

In 1948 the UN partitioned the remaining area, allocating another third to be divided up between Jordan (the West Bank) and Egypt (the Gaza strip). This left the Jews with 20% of the land of the Davidic kingdom of Israel and of the original mandate, all of which was to have been set aside as a homeland for them. The area left for Israel was the Jewish majority cities of Acre, Haifa, Tel Aviv and West Jerusalem, plus other smaller towns and the Negev Desert. This amounted to approximately one sixth of one percent of the land in the Middle East.

The Jews agreed to this arrangement, the Arabs did not. Surrounding Arab nations announced their intention to destroy any Jewish state, and urged resident Arabs to leave, promising they would be back in days, and able to take up not only their own homes and farms, but those of their Jewish neighbours.

The day after the new state of Israel was proclaimed, the armies of Lebanon, Syria, Jordan, Egypt and Iraq attacked the tiny nation, whose land area is about the same size as Kangaroo Island. The first attached picture shows the direction of the invading armies. The day before, Arab League Secretary, General Azzam Pasha declared “jihad”, a holy war. He said, “This will be a war of extermination and a momentous massacre which will be spoken of like the Mongolian massacres and the Crusades”. The Mufti of Jerusalem, Haj Amin Al Husseini stated, “I declare a holy war, my Moslem brothers! Murder the Jews! Murder them all!” The second picture is of Al Husseini meeting with Hitler in Berlin in 1942 to discuss the implementation of the Final Solution.

By a miracle, the new state survived. The West Bank and the Gaza strip remained under the control of Jordan and Egypt. Another attack was made by Arab nations in 1967. Quotes from just two of the Arab leaders involved:

“We will not accept any … coexistence with Israel. … Today the issue is not the establishment of peace between the Arab states and Israel …. The war with Israel is in effect since 1948.” – Gamal Abdel Nasser, President of Egypt, May 28, 1967.

“The existence of Israel is an error which must be rectified. This is our opportunity to wipe out the ignominy which has been with us since 1948. Our goal is clear – to wipe Israel off the map. We shall, God willing, meet in Tel Aviv and Haifa.” – President Abdel Rahman Aref of Iraq, May 31, 1967
.
After the 1967 war Israel took control of the Golan Heights (Syria), Gaza Strip (Egypt) and the West Bank (Jordan), to give a buffer against further attacks. The next such attack took place 1973, on the holy day of Yom Kippur, when its massive and much more populous Arab neighbours again united to destroy it.

Israel is a very different place from the nations which surround it. Israeli law permits no discrimination on the basis of race. Arabs can be and are, members of the armed forces, police, the judiciary and parliament. By contrast, Jews are not permitted to reside in the West Bank (which is the traditional Jewish homeland of Judea and Samaria), or in Jordan or Saudi Arabia. There is no discrimination in Israel on the basis of religion. There are mosques in most Israeli towns, and the Baha’i faith has its centre in Haifa in northern Israel. By contrast, just in the last few weeks, churches, some dating from before Muhammad, have been destroyed in Iraq, and Christians told to convert, leave or be killed. Members of other religious minorities have been subject to wholesale torture and murder. There is no discrimination in Israel on the basis of sexuality. Again, by contrast, a gay man in Saudi Arabia was sentenced this week to 450 lashes and three year’s imprisonment.

Some 850, 000 Jews were ethnically cleansed from Arab nations following the establishment of the state of Israel, and their property seized. Those who were not murdered have been repatriated in Israel. A lesser number of Arabs left Israel in 1948, despite being asked to stay and help build the new country. Many of them and their descendants still live in refugee camps in Arab countries, who refuse to accept them as citizens, despite those countries’ much larger land areas and greater natural resources.

Hamas is the elected governing body in the Gaza strip. Its charter calls for the destruction of Israel and the murder of Jews everywhere. When Israel withdrew from Gaza, with the promise from Palestinian authorities that giving up the land of Gaza and the West Bank would lead to lasting peace, it left solid infrastructure including roads, schools, hospitals and some 3,000 greenhouses which produced an abundance of fruit and vegetables.

Israel wanted and wants Gaza to succeed, and it could. It has some beautiful beaches. It could be the Ibiza, the Monaco of the Eastern Mediterranean. But Hamas’ purpose is not to govern. Its only purpose, according to its own charter, is to destroy Israel. The glasshouses were destroyed – remnants of the Zionist entity. Other infrastructure has been allowed to fall in to ruin.

Hamas has constructed over 1,000 tunnels under the border from Gaza into Israel, some several kilometres long, using child labour, and hundreds of tons of cement which could have been used for other construction. Those tunnels have only one purpose – to conduct terror attacks against schools, homes, farms. Since the beginning of this year, Hamas has fired over 3,000 rockets into Israel. Israel is the about the same size as Kangaroo Island, or the city of Adelaide. Residents of some areas have less than fifteen seconds from the sounding of an alarm to get to shelter. How would residents of Adelaide respond to relentless attacks like that from an enemy sworn to their destruction? Hamas has broken every ceasefire in the latest conflict, firing rockets at schools, homes and shopping centres – on the first day after the last ceasefire, on average a rocket every ten minutes. Would you tolerate this? Even if the nearest shelter was 200 metres away, could you and your family run 200 metres in 15 seconds?

Israel is not perfect by any means. No nation is. It has had its share of injustices and poor policy decisions. But Israel’s response has consistently been to say that it is not at war with the Palestinian people and that it wants successful, prosperous and peaceful Palestinian neighbours. Never in the history of any conflict has one side treated the other with such care and consideration. Because Hamas has refused to spend money on infrastructure, almost all of Gaza’s electricity and water are supplied by Israel. Most of Gaza’s food and medical supplies also come from Israel – Egypt despises Hamas and long ago closed the southern border, meaning no trade or traffic from Egypt. On one typical day, 21st August, Israel transferred to Gaza 174 tons of natural gas, 548,093 litres of fuel, and 178 trucks of food medical and general supplies. On that day Hamas fired 68 rockets at civilian targets in Israel.

Hamas uses schools, hospitals, mosques and apartment blocks to fire rockets and mortars. Israel drops leaflets warning which locations are targets. Before any civilian location is fired upon, residents and workers are telephoned by Israel Defense Forces to warn them to leave the building, and finally buildings are door-knocked – a harmless percussion round is fired several minutes before to give people time to leave. Israel has shown over and over again that it does not wish to harm the Palestinian people, it simply wants to live in peace in its own borders. Israel has never tried to enlarge its territory. It has given up territory in return for promises of peace, promises which have never been kept.

If you were Israel, what would you do? 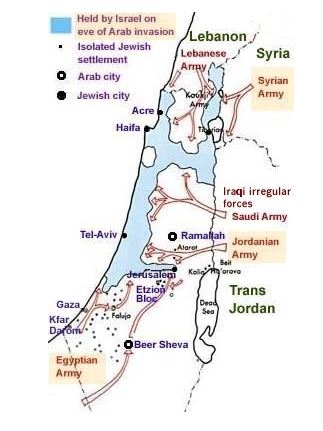 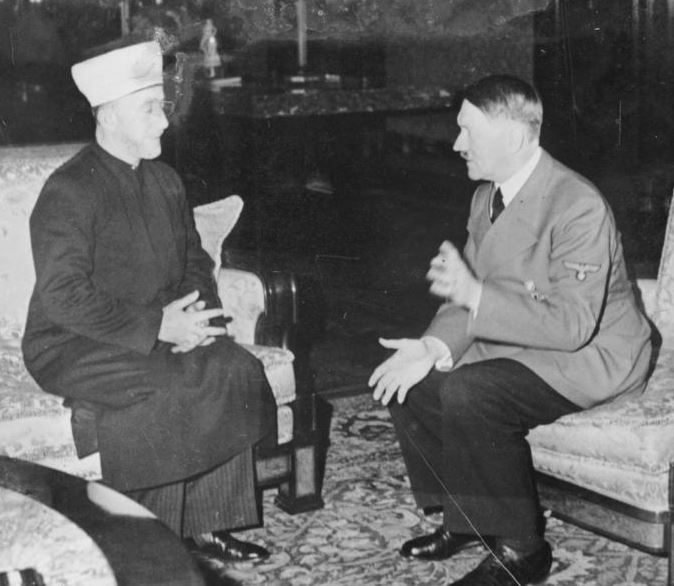 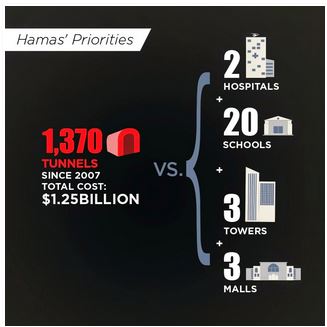 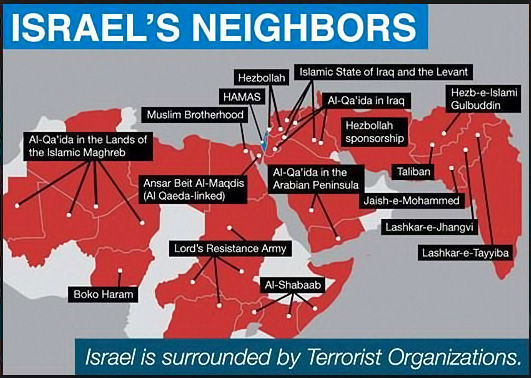