Denmark – The Happiest Country in the World??

So Denmark is the happiest country in the world, right? With free education, free childcare, free health care, early retirement …

Except, of course, none of those services really is free. Doctors don’t work for nothing, hospitals aren’t built for nothing, teachers expect to be paid.

Free means either someone else is paying for it – lucky for you, not so lucky for the person who is paying but not getting the service. Or you are paying for it in ways that are hidden, usually through taxation. 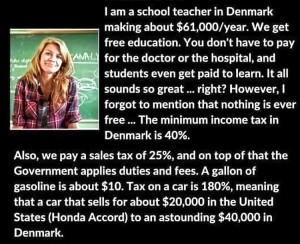 In Denmark, the happiest nation in the world, 11% of the adult population regularly take anti-depressants. The suicide rate has averaged 20.8 per 100,000 people for the last five decades – one of the highest rates in the developed world, more than twice that of Australia or the US.

Between income tax, sales tax and other duties, Danes pay to the government an average of 80c out of every dollar they earn. They pay the highest prices in the developed world for electricity. Because of this, businesses in Denmark cannot compete. They either go bankrupt or move. Most Danes will never own their own home.

Happiest country in the world? Not quite.

Too bad it’s a lie from one end to the other. I live in Denmark and there is not a single truth in that meme. Someone just typed out up and made it out of whole cloth. Shame for sharing it without being critical.

Oh and the “teacher” is an actress who played a teacher in a TV show. Nice work.