A Scholar, a Farmer, and a Nurse

A photo of the War Memorial in Adelaide, taken by my friend the Honourable Peter Lewis, former Speaker of the South Australian House of Assembly. The description is Peter’s words. 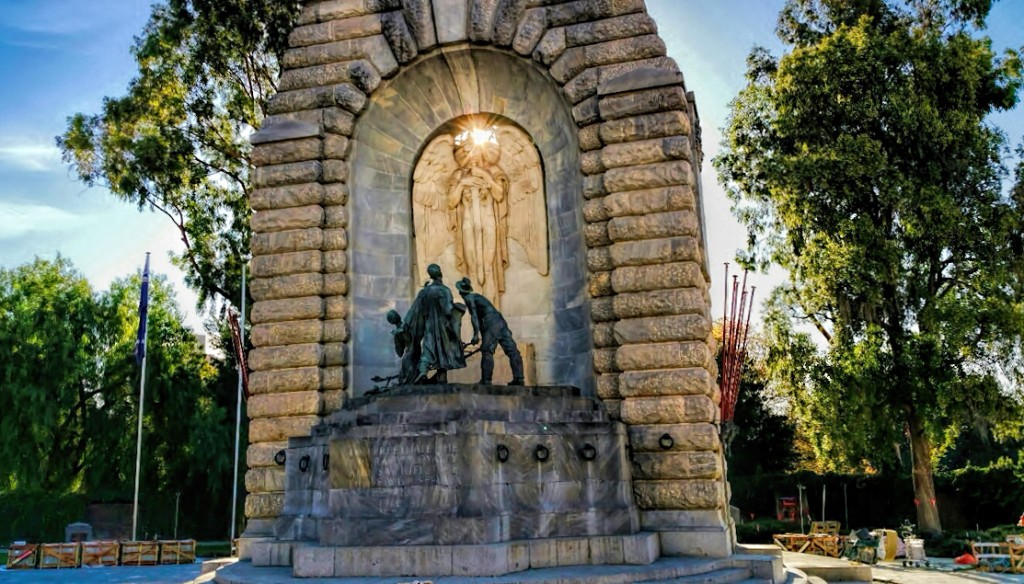 “An amazing moment when it is possible to see the brilliance of the Designer & Creator of such wondrous things. The Grand Geometrician of the Universe inspired the designing architect to make this amazing sight possible twice a year for ~8 days, just after the March equinox & ~8 days just before the September equinox at about the same time every day  ~16:15hrs plus or minus a minute or two, depending on where you stand & how high you hold the camera hand piece.

The Vision of Glory is made possible by placing the Memorial on the site at 45° to due North (or due West) & far enough back from the northwest Corner of Kintore Ave/Gawler Plc with North Terrace, such that you can stand on/near the footpath and look at the head of the Angel to see the glorious energy of the beams of sunlight coming through the the sculpted open space around the Head, as though to give us a message from God that all things are noticed & known to the Almighty who provides understanding, succour & compassion to those prepared to make the effort to fight for righteousness, freedom & responsibility and whose choice in Service was to take the risk of having to make the Supreme Sacrifice, just as did the Son of God for us.

This was taken on my Samsung Galaxy 4. Notice that when you zoom in you can see the Angel’s head & how clear the image is of the scholar, farmer &  nurse are, as they heed the responsibility confronting them.”

Just a little comment on Peter’s words. In most cases the farmers and nurses are still taking their responsibility seriously. I am not so sure about the scholars.