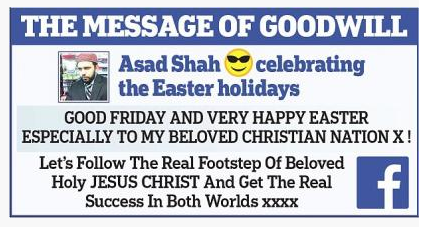 A couple of days after that advertisement appeared, Tanweer Ahmed, a Sunni Muslim, traveled 200 miles in an Uber car from Bradford in England, to Glasgow in Scotland, where he waited for Assad Shah to leave the convenience store where he worked, then stabbed him 30 times, stamped on his head, and sat on his chest waiting for him to die, which he did later that night.

“Mr Shah’s family, originally from Pakistan, are members of the Ahmadiyya Islamic sect, which preaches ‘love for all, hatred for none’, but is seen as sacrilegious by orthodox Muslims.” Family members now fear they will be Islamic murderers’ next targets.

The UK Daily Record quotes a source who says that “The hardline Sunni Muslims call Ahmadiyya Muslims kafir. They say they are non-believers.”

87 percent to 90 percent of all Muslims, or about 1.5 billion people, are Sunnis. Additionally, “the majority of modern Muslim scholars continue to hold the traditional view that the death penalty for apostasy is required.”