The fate of an Australian mother and a TV crew embroiled in a botched child recovery mission in Lebanon will be decided today with the start of a hearing for 10 people facing charges of kidnapping, harm and disrespect for authorities. Brisbane mother Sally Faulkner will front Babda Palace of Justice in Mt Lebanon in Beirut alongside high-profile news reporter Tara Brown and her Channel 9 film crew, three local men and two Britons.

Ms Faulkner and the nine others including the Channel 9 crew were charged over the failed attempt to snatch her kids, three-and-a-half-year-old Noah and five-and-a-half-year-old Lahela off a main street in Beirut as they waited for their school bus with a nanny and grandmother who was pushed to the ground and hit on the head during the scuffle. 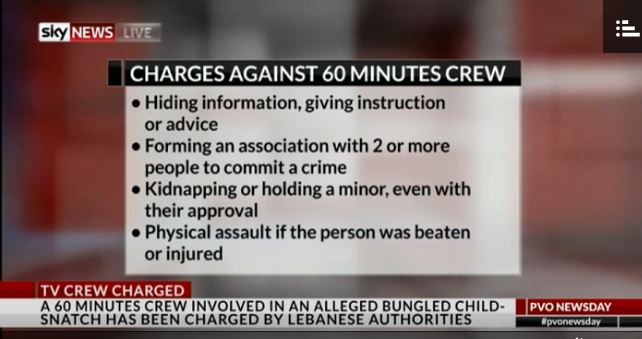 “It is a big mess, a really big mess, 100 per cent,” the children’s father, Ali Elamine, told News Corp Australia.
“The children are good, they are in good health and that is all that matters not the media not what happened, but it (CCTV of the botched operation) is for everyone to view.
“But the children, I’ve calmed them down as much as I can. It was a bit rough and tough. The manpower … it went wrong in places.
“It is a mess, all of it. She (the children’s mother Sally Faulkner) could have gone about it in a different way, not like this.
“What happened shouldn’t have happened and the kids should not have been put in a situation where someone could have been harmed; the kids should not have been dragged into this.”

On his 69-year-old mother Ibtissam Berri, who was slightly injured in the botched snatch, he said: “She is coping, but it wasn’t great for her.”
Ms Berri described the operation as violent.
“I was holding Noah’s hand, while my maid was with his sister Lahela waiting for the school bus,” she told local Lebanese television.
“Assailants then attacked us and snatched the children.”

I have little sympathy for the 60 Minutes crew, especially if, as is now being claimed, they paid the kidnappers/child recovery contractors a fee of over $100,000.