This image has been floating around Facebook for the last few days: 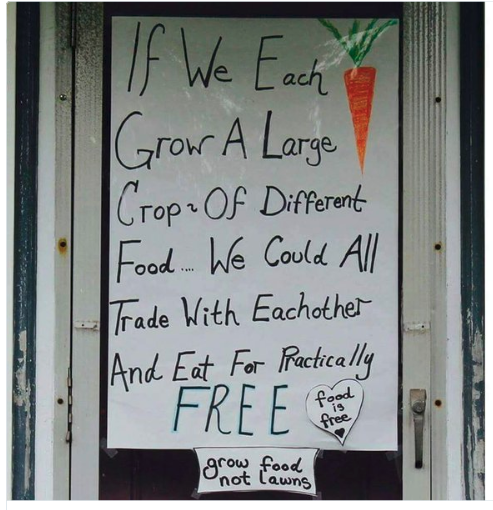 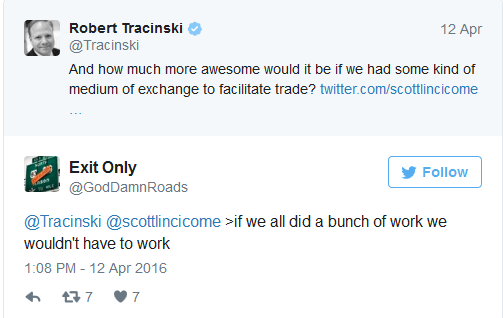 Here’s the mind-blowing argument: “If we each grow a large crop of different food, we could all trade with each other and eat for practically free.”

Well, for one thing, growing your own food isn’t exactly “free,” not even “practically free.” As anyone who has his own vegetable garden knows, it requires seeds, fertilizer, irrigation, weeding, protection from insects and birds and animals, and a lot of work. The cost may not all be measured in monetary terms, but it isn’t free. In fact, it’s notoriously easy for a vegetable garden to end up costing more money than it saves, which is why most of us do it just as a hobby.

But let’s not pick this apart. Let’s take the idea seriously. Hey, what if we all became small farmers and traded with each other? As they say on the Internet: you’ll never guess what happened next.

Maybe instead of everybody growing the same things, we could all produce what we’re best at and trade with others for what we need. We could come up with a catchy name for this, like “division of labor.” And we would need somewhere to exchange these goods with each other, which we could call a “market.”

Maybe we could get even more specialized. Some people could devote themselves just to growing young plants in greenhouses in the spring for others to plant when the weather gets warmer. Or they could provide seeds for other people to use, or breed hybrids with better yields or other desirable characteristics.
Maybe some crops would grow better in different areas, or at different seasons.

And maybe some crops would grow better in different areas, or at different seasons. I’ll bet you can’t grow blackberries in the middle of winter, but there are other areas of the country, or of the world, where these things still grow even when they won’t grow in your front yard. Maybe you could trade with people who live in those places.

Still, crops come ripe at different times, so maybe we need a system where I can trade my spring harvest of peas for somebody else’s fall harvest of pumpkins. Maybe we could write this all down on little pieces of paper which we pass between us to make trades. Has anybody ever thought of that?

Go read the whole hilarious article at The Federalist.