China to Complete the World’s Longest Sea Bridge this Year

What an astonishing achievement this is.

A fifty-five kilometre sea bridge, and a six and a half kilometre under-sea tunnel.

“The engineering challenges have been immense.

The soft — and in some places deep — seabed meant engineers had to drive more than 100 huge steel cylinders into the sandy bottom to form the foundations for two artificial islands.

The flight path for Hong Kong International Airport also cuts right across the bridge, meaning engineers had to contend with height restrictions.

They also needed to ensure the huge number of ships that carry exports from “the world’s factory” are not impeded.

They solved this by building an undersea tunnel for more than six kilometres.

Environmental concerns around dredging also flared up, with engineers needing to factor in a white dolphin population that had already begun declining before construction even started.

“At the peak of construction, there were about 14,000 workers building this bridge, and 300 ships. It was an extraordinary construction site,” said Yu Lie, the deputy director of Hong Kong-Zhuhai-Macao Bridge Authority.

The bridge has also been designed to withstand earthquakes and seasonal typhoons that lash cities around the Pearl River estuary each year.” 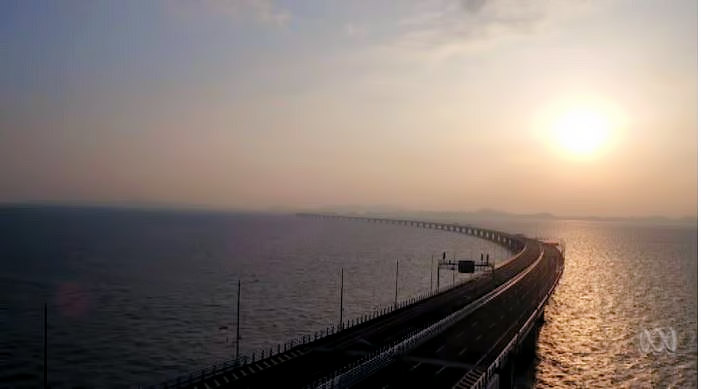